I’m very happy to let you know that I pushed today a new update for jboss-as package to Fedora.

The 7.1.1-4 version includes a lot of new modules as well as some design changes, let’s go briefly over them.

The most important change from a RPM/build stability POV is the move from building minimalistic to default profile. This let me know to drop about 60 (sic!) patches from the jboss-as.spec.

Since the change wasn’t’s trivial because it required rebasing and manual merging of previous patches I hereby ask you for help with testing. I did my best to eliminate bugs, but… Please install the new update and check if everything works for you. It is very important that you add karma on that page (remember to log in first!). This package will go into stable only if it hits the threshold of 4 positive karma, I’m not going to force push it like I did previously. Keep that in mind and encourage others.

If you’re interested in some of them, please test the integration.

There were few bugs reported, one was hanging for some time in my queue.

How to get it

In the early days of packaging JBoss AS into Fedora I had a conversation with Alexander Kurtakov (aka The Fedora Eclipse Guy). He told me that he’ll take a picture of himself in the JBoss AS t-shirt once the jboss-as package hits Fedora repositories. Well, this is now reality, so here is the pic :) 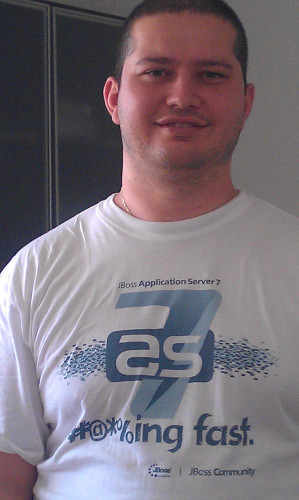 Feel free to report any bugs in #fedora-java IRC channel or directly in Bugzilla.